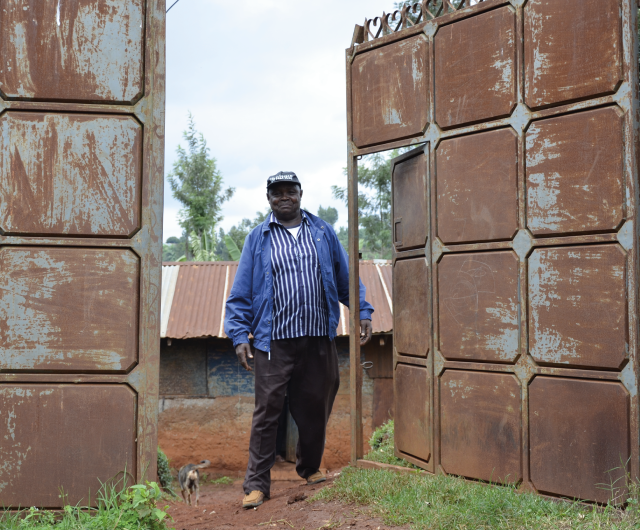 After the Rwandan experience, I headed to one of the most exciting & at the time, complicated coffee sectors in the world. The Mecca of acidity. That cup that every farmer in the world wishes to do. The coffee puzzle & monopoly at the time: Kenya.

From a hot summer in Europe, arriving to the cooling nights of Kigali was a surprise, so I had already the idea that Kenya won’t be as hot as I could presume.

For Kenya the season was a bit late, as the main crop was already passed (you can be sure of that when you see our coffees spot in Europe already), and we came by what they call "fly crop", which is basically the late tiny harvest of the country. Our trip was mainly for two things:

To start, we visit some coops we are working with, as we wanted to understand a bit more of they are organized in the country, so we paid a visit to Gitare, one of the wet mills closest to Nairobi that we started working with this year.

A group of producers were going to receive us… and starting putting the first pieces of this puzzle.

The producers in Kenya are generally small holders (2 out of 3 have in average 300 bushes and produces between 1000-1500 kg of cherry per year; being the rest owners of Estates or micro Estates), and they grouped themselves into coops.

The coops would manage the wet mills where the cherries would be collected for being processed. It is important to say, that in everything what concerns the processing, Kenyans inherited from British one of the most performant (quality wise) ways of processing. This process known as Kenyan washed or double washed, was part of a complete coffee know how: married to their varietals which were at the same time developed for their conditions & their terroir, has given them one of the most valuable places in the specialty coffee sector for decades. This means, that sometimes when you met someone on charge of a wet mill, has been producing quality coffee for many years.

A particular process: the "double fermentation"

So to go back again to the organization of the sector… farmers are grouped into coops. The Coops would have some official elected for representing the farmers. Depending on their size, there would be more or less elected. For example, Gitare that we visited, had 4 wet mills and 3 official elected per each, to make a total of 12.

Still following or are you as lost as Alannis Morrisette on her last albums?

To make it in a form of a simple (or at least simpler, as is almost impossible to make it simple), the path is this:

It is important to precise some points…One company is not allowed to do all the different works: be a dry mill, marketing agent & licensed exporter at the same time. They need to be different companies. The producing coffee & wet milling, is something that is exclusively allowed to do just by Kenyans.

The auction in Nairobi

On Tuesday we went to the auctions, to see how they work… and in somehow reminds our old Tetris or Pacman!

This is quite complicated, isn’t it?

The way you can try to avoid this so complicated path, is to in direct relation with the coops & Estates. That way you can try to buy directly which is what we intend for the future, in order to be able to create long term relations… there is however one thing you need to be sure about, to convince a Coop/Estate to sell you directly, you need to be more interesting than the reference price of auctions, that means paying more than the market does, whenever there’s proven quality.

So as a final conclusion, even if this is a huge & bureaucrat path to buy coffee, at least it helped producers to get premium prices for decades, demanding of course one thing in exchange: good quality. That’s why in Kenya you have one of the most premium coffees, and at the same time, some of the best paid producers in the world.

Stay with us, as we will tell you how was our Tanzanian experience to finish our eastern Africa trip of this summer ;-)