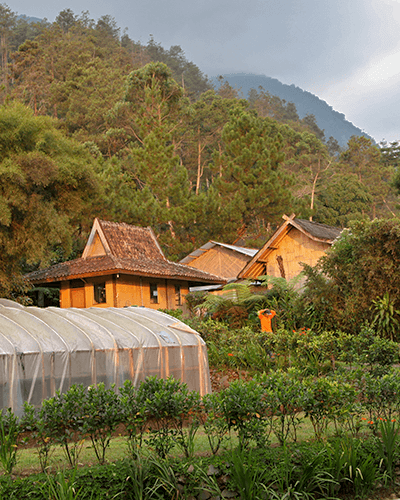 * This sentence means "Do the little things sincerely" and is the slogan of Klasik Beans, a new cooperative we started to work with this year. Coming back from Indonesia, Angel talks about the coming projects and coffees arriving in December.

Talking about Indonesia and coffee is not always simple

Imagine one of the largest and biggest archipelagos of the world, producing coffee. Big, gives you diversity (we have coffee from Sumatra down to West Papua). And large, gives you complexity, in terms of harvesting period (almost 9 months in harvest), logistic (few are the exporters who like to consolidate coffee from each region), and of course, different climates (in Sumatra, wet hulled coffee came out, for the drying problems farmers had due to their insufficient hours of full sunshine), and terroirs which are some the opposite to the others.

At the same time, imagine that this was among the first historical countries producing coffee in an extensive way, and that you could find on their lands, Arabica as Robusta production, but also, here is where we found that famous hybrid of both, in Timor… exciting, isn’t it?

These last days I had the chance to meet with the cooperative from Java, called Klasik Beans, a group of farmers we have been following for a couple of years and that we finally bought the first couple of tons last year. It has been a big chance, as I have witnessed firsthand all what they have done which is certainly more than impressive, and gives us clear ideas on what coffees we might bring from them this crop.

Klasik Beans are located in Java, where they have 4 wet mills in which they collect cherries from small holders: Pacet, Puntang, Garut and Ciwiday.

But who are they?

Well, Klasik Beans is a group of farmers, who started their adventure in coffee a couple of years ago, with the aim of becoming among the first cooperatives in Indonesia producing specialty coffee. At the time, an ancient delegate of the French Embassy and agronomist, called Oceane Trevennec, helped them out to start.

The team at Java. On the right, Yadi is a farmer and sales representative of the coop.

They started with Java, and got to sell their first beans in Australia and in the US, but also and what helps them out, is the growing specialty coffee scene of Indonesia, as they are selling to some of the top specialty Indonesian roasters and help them to develop their sales volume (imagine a potential market of over 250 million people)!

Having one of their coffees at Blue Doors in Puntang

Developing their knowledge in processes

The adventure of Klasik Beans continued, by the development of their knowledge in processes. At this day, they are capable to prepare lots of: Semi Washed (which is a depulped coffee, dry fermented), Fully Washed (depulped coffee, wet fermented), Honey, natural and also Wet Hulled (process known in Sumatra, north of Indonesia, in which coffee is hulled at a high moisture, over 16%, and then dried in green, which gives a bright blue color to the bean). This certainly can make international specialty buyers come to see them…

With their success in Java, the cooperative extended their operations to some other islands. Like Bali, where they have already 3 wet mills, and are already experiencing with different processing.

Yon, who is in charge of one of the mills near Kintamani

But they are also present in other islands of the south, where they get to be closer of producers, and have helped them out to improve their processing methods.

Andy, on the right, shows Waerebo farmers how to do floating to take defects out.

Andy, who is their representative at Flores Island, shows Waerebo farmers how to do floating to take defects out. You can also see typica and yellow bourbon being separated, as they were to make a mono varietal honey microlot.

We have, as before said, a clear idea of what we would be able to bring to Europe this year, and above all, happy to see projects like this coming out in Asia, but also, extremely honored when they chose us to be their partners… so you better wait for a happy Indonesian Christmas this year in your roasteries !!

Angel, reporting from Indonesia, for the Belco team ;)