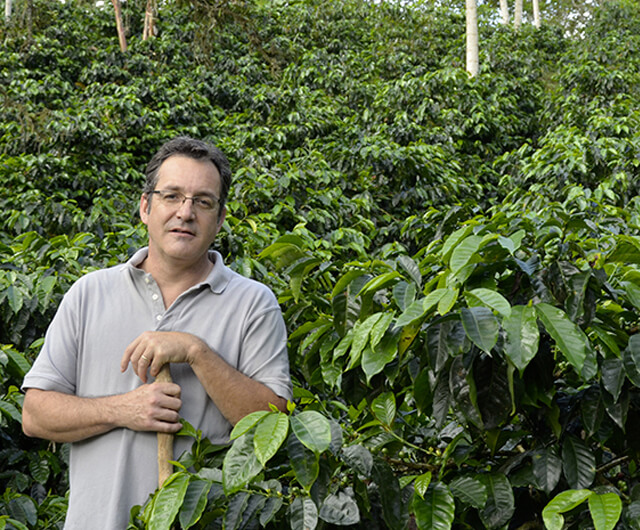 Interview with our producers

But there’s something, about Arnaud… !

When I first started into coffee, I can clearly remember about two things.

The first is that I was truly amazed for how some coffees from Ecuador cupped. Second thing, is that I talked to a roaster about it, who gently asked me if those were organic. He then asked me, what the point if not was. Very naïve from my side, I didn’t know that Ecuador was an origin known for producing low quality organic coffees. Talked about terroir coffees from Ecuador, so, was not very logical.

I have probably said this before, but the producers we have worked with, in Ecuador, are just like salmons, they go all the time against the flow. And well, our friendly & lovely producer Arnaud, has lead these specialty salmons for a couple of years so far.

Many should probably have seen the videos we before published of his visit in Bordeaux (link to the videos), but few now his adventures & misadventures for producing specialty coffee in Ecuador.

It was for me the last origin trip of the year, by December, plus to add to moving our offices, the least I can say is that I was a bit tired. And still, meeting him again, is one of those trips that I would say fills your energies back again.

I had the chance to be with him again, and I had the incredible chance to see his beautiful “Las Tolas” Estate, plus his new crazy adventure of “Las Terrazas del Pisque”.

But what is so particular about his farms?

First we need to put Ecuador in the context, the coffee production has always been done in the lower altitude regions (up to a maximum of 1200 masl, really, max), as it is very complicated to produce coffee in the higher regions: from the 1400 up to the 2200 masl were coffee can still grow.

Then, these regions were mountain farms of small holders are still far from Guayaquil, where the big dry mills are located, so logistically, it is very complicated to mill & move the coffees for them. Basically they need to do all the wet milling, and sort it really in a good way, to ensure that the dry milling has yet to be minimum. If to all of these, you add a dollarized economy, you would get all the ingredients to have small farmers not competitive to put their coffees compete with must of Latin America producing countries.

But well, our friend Arnaud is one of those dreamer and above all, passionate persons in this world, who had the firm idea that he could grow the best coffees of the world in Ecuador.

And well, it is very likely that he did it… to be honest, his caturra production from 2011 is probably still the best coffee I have cupped up to this day in my life. I can swear it could heal anosmia to the one that smell that grinding…!

Arnaud had experience in coffee, studied a place in Pichincha, more precisely in the town of Las Tolas, where he was sure could produce a singular coffee.

Las Tolas, were the triangular upside down tombs from the Yaucos, which he has per dozens on his farm, and the particular of this region is that it is located somehow between the cloud forest & the rain forest (funny, as this is the country were for the first time a producer has told me “we are going down to get to the farm”), and here, there is a “hole” of clouds, which allows the bushes to get some sun… otherwise would be impossible for cherries to properly ripen (he gets sometimes, maturation stages of over 10 months).

Las Tolas Estate, between the clouds

Added to this, Arnaud, brought some varietals from El Salvador, where he leaded some projects to develop the coffee culture in the north of the country: Bourbon, Pacamara, Caturra, Pacas and Java… Java, well, yes, he had a long history with the French coffee missions, so is not weird he had some Java’s on his possession ;-)

He met with Nicolas (our founder & former President) a couple of years so far (by the creation of Belco), and we started importing his coffees, varietal by varietal separately, already at that time Arnaud was talking of his farm as a vigneron. And yes, that was our first Estate coffee, and at the same time, our first parcel & mono varietal microlots. Well, yes, we started high didn’t we?

So this year, we have arriving from Arnaud: Bourbon, Pacamara, Java and his special blend… yes, as a good vigneron, he did also think on having a blend of his own farm, with caturra & pacas, as he said, “with the fruitiness of the caturra & the body of the pacas, we can make an extremely well balanced cup… plus been these beans of the same size, the impact on the roast for roasters would be minimal”.

Yes we know, he is an artist, and has always been.

I had the chance as well, to visit his new project, Las Terrazas del Pisque. This project is still a bit more complicated than Las Tolas. How is that possible? Well, imagine an arid mountain near Quito where you can reach from 1800 up to 3200 masl… and then, try to put a green small square in between this view, surrounded by Lavender as living walls & in front of a vineyard. Well, that’s Arnaud trying to produce coffee again, in high circumstances, he is just like Collective Soul rocking in Morocco! But that, we would let you know later, as we will expect to have production and exportable coffee just for the coming harvest and not yet!

As a small introduction for this year, we have started to work with a new neighboring farm of Las Tolas, called 1600, which has been started by some passionate entrepreneurs well advised by… Arnaud, of course. We would only have 10 bags for this year, as these are their first years producing, but hoping to increase this relation for the long term as well !

ETA: arrived to Le Havre, ask for samples from mid-February on!

Angel, for the Belco dreamer team