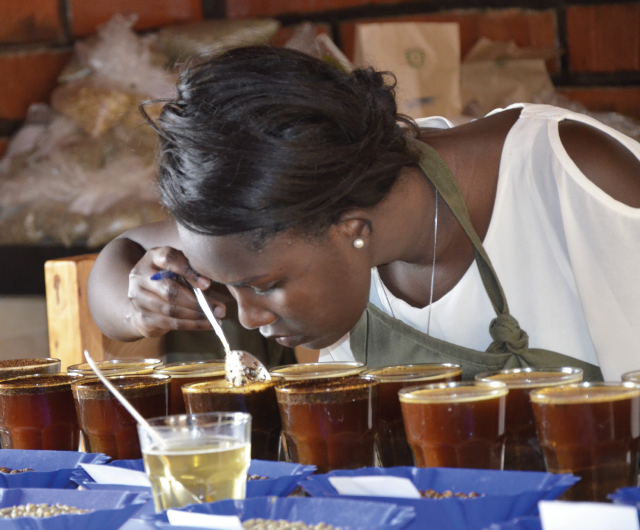 Last week I had the chance to visit some of our producer/exporter partners in East Africa. In the beginning the trip was supposed to be a bit different, I was going to judge at Burundi’s Cup of Excellence, but finally and due to their political situation we decided not to participate. Instead of that, we turned the plane into the neighboring countries :-)

The first of my destinations was the tiny Rwanda. Tiny in surface, huge & impressive on their current development (it is the second growing economy of Africa now!). It was long time ago (around 2008) when we started working a “FW” from Rwanda, and actually, from the same WS we currently work, Kayumbu.

Coffee, as in plenty of African countries, was most of the time “home processed” by farmers. This means, that they would depulp their cherries and bring the parchment to the dry mills for selling. The obvious problem was of course in quality, as they weren’t able to make a good process or even do some fermentation… as most of the time they depulp & take mucilage out at the same time. This is one part, the other, is that imagine all of those lots being mixed together (a farmer in Rwanda produces between 675 to 700 kg of green coffee per year!!).

Big challenge was for exporters to start convincing farmers to bring their cherries to their washing statins instead of parchments to their dry mill… they had the idea that a parchment allows them to “follow the market” for a longer period, because “market might go up”… how can exporters convince them to work with them? The first & the logical, paying more… then, if coffee was of a good quality, paying a second payment (as they can also sell it more expensive). And last but not least, farmers don’t bring their parchments to the dry mills, middlemen do, and of course, for a commission. If farmers bring their coffee directly, they won’t need to pay this commission. Even if hard, the country is winning the battle against bad quality, and exporters tell us that if before they were doing 70% of Semi Washed & only 30% of Fully Washed, now is just the opposite, and they do push & encourage this path!

Now we are making another step in promoting Rwandan’s fine coffees, and we have bought for the first time some microlots J Our Titus from Kayumbu WS is coming from the center of the country, while the microlots we have selected for this harvest, are from the western province, in the surroundings the Kivu Lake. Some names to have in mind for roasters would be Birembo, Kanzu, Gisuma… and some fruits for coffee vocabulary would be citrus, pineapple, white raisins… you’re kind of guessing it, they’d be a bomb !

This is just the first part of our eastern African diaries; keep tuned for our pass through Kenya & Tanzania

Angel, for the Belco team