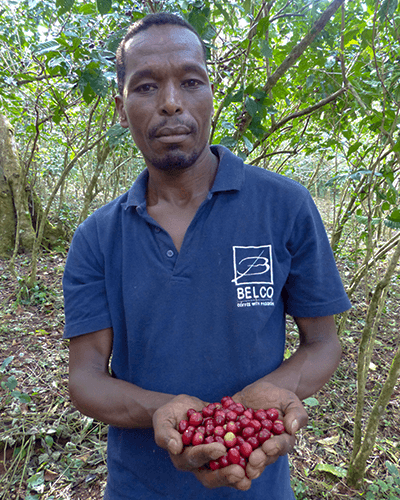 Ethiopian seeds raise questions that are more than often left unanswered. For example, the name given by importers and roasters to the variety of Ethiopian seeds is “heirloom”, which surprisingly enough only refers to the local origin of the different varieties. This lack of information is striking insofar as south-american farmers use those varieties to produce specific profiles and as a marketing tool. It may look surprising when we know that Ethiopia has at its disposal the greatest variety resource in the world. And that’s actually the reason why the variety called “Geisha” hasn’t been promoted by the farmers from Gesha, in Kaffa, but by farmers from Panama in the early 80’s instead.

How to explain this phenomenon?

Why would Ethiopian exporter almost never give information on the variety of the coffee they export?

Who produce the seeds in Ethiopia? Through which process?

Traditionally, the farmers produce their seeds themselves. They go to the wild coffee forests, pick the cherries from the coffee trees to produce the seeds or small trees at the foot of coffee trees that reached maturity and that will either be replanted as plant nursery or on the farmer’s plot.

This relatively simple technique is one way of production that we can qualify as "terroir". In fact, with this method, the varieties used are endemic. This only issue is that in wild coffee forest, there are a gazillions of different varieties of coffee trees. Consequently, it is almost impossible to talk about mono-variety.

Still today, in each local coffee zone, there are one or several people that produce the seeds traditionally for all the producer in the that zone. Therefore, the seeds come from either the wild forests around or from the farmers’ cherries in the region. Generally speaking, those seeds’ producers own plant nursery from which they will sell their production while keeping a part of it for their own plot. The large plantations usually have their own nursery. That’s how « smallholders had served as a major source of coffee seeds and seedlings for the informal farmer to farmer seed exchanges » (Taye Kuffa et alii ; 2011). What is certain is that  there are no public or private enterprise in charge of the seeds production.

Today, the Jimma Research Center is in charge of selecting, valorizing and enriching the seeds for production. It is the only public institution involve in that domain.

The mission of Jimma Reasearch Center (JRC) is to coordinate the research on Ethiopian coffee. Essentially, since 1987, JRC took the initiative to select and produce improved seeds initially to fight against CBD with stronger and more resistant varieties. Between 1979 and 2010, JRC has produced more than 175 tones of seeds dispatch around the entire country. The sites of production are the following:

110 The number that follow is the number of the sample given during the sampling. The technicians and researchers of the Minister of Agriculture would go in the forest to observe and locate the trees that were resistant to, for example, blight or CBD etc. Once spotted, if it wasn’t already listed, they would sample it and number it according to this code: year-number of the sample. Today; when JRC discover or develop enriched seeds, they give it a name of location as for example Mana Sibu, which is a locality near Gimbi, and gave its name to a variety. This shows incredible diversity of Ethiopian coffee forests.

Despite of all those efforts from the JRC, the production of seeds still doesn’t satisfy the demand. The production in 2010 went back to its 2005 level to supply a little less than 20% of the demand. The reasons are numerous, we can note the lack of lands available for the production of those seeds, irrigation and storage problems. There are no structure regarding the actors, either public or private, who produce those seeds, which is also one of the main reasons for this production deficit. There are also no national standards, neither are there any certification (Tanya Kuffa, 2011.) This added to simple problems concerning the nature and the name of the different varieties planted.

Nevertheless, isn’t it also a chance?

In fat, the artisanal way allows to a certain extent the preservation of the biodiversity. We have seen above that the production by JRC focused on a dozens of varieties. The traditional or artisanal method has generally allowed the culture of varieties collected locally and therefore reinforced the different terroir of coffee by highlighting their specificities. The diversity and the specificity shouldn’t prevail over information and mono-varieties? It is of course essential for the yields to grow the production of seeds to satisfy the demand, improve the yields and the stamina of the seeds against diseases using improved seeds, but it also need to be done while preserving the uniqueness of Ethiopian terroir and diversity of varieties.

Jacques, for the Ethiopia Belco Agency