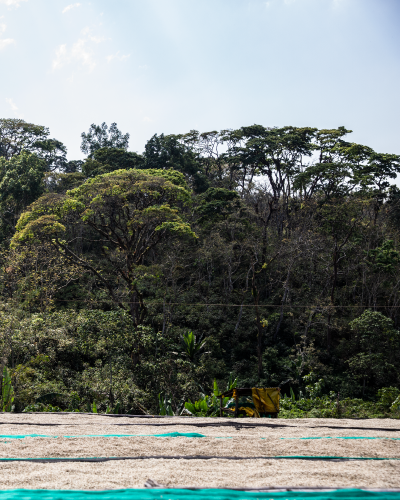 Last week we introduced  our "Anfilloo Quality Project" started in the Wallagga region in south-western Ethiopia. Our interest for this terroir is due of course of our historical attachment with the area and its producers, but that is also due to the potential of this true cultural heritage. To better understand the importance of Anfilloo, Jacques gives an overview of this birth place of Arabica.

Today, Anfilloo is part of the coffee forest of western and south-western Ethiopia. Previously, this forest connected the current West Welega zone, Illubabor zone, Jimma zone and Kaffa zone heading south all the way to the current Sudan border. In this collective region, Arabica was born and, to this day, there many wildlands with forests still exist. The people of these regions used to live on the outskirts of this high altitude rain forest and, in particular, neighboured the coffee that plays such a central part in this area. The Anfilloo coffee tree forest has some interesting aspects and a lot of rich diversity in terms of altitudes, soils and micro climates: after all, this is the site that bore the now ancient history of coffee farming.

The history of coffee farming began thirteen generations ago in Anfilloo. Considering that one generation corresponds to thirty years, this history is quite old: around four hundred years.

Apparently, the founder of coffee cultivation was a certain Godii. This man would have come from the zones currently known as Jimma or Kaffa.  Oral tradition has it that he had white or light skin. The indigenous people called him Busase (pronounced Boossassay). He stumbled upon wild coffee trees in the Waabaa forest, a region native to coffee growing. Thus, he decided to pursue coffee farming and collected seeds or small trees from the primary forest. Following is the line of Godii, founder of the Waabaa community: To this day, the habitants of Waabaa refer to themselves as descendants of Godii. When it comes to this coffee’s destination, the following questions arise: was it consumed locally and used for bartering? Was it sent to what is now Sudan via commercial routes?

The great coffee growing boom at the turn of the century

Waabaa sits at the edge of the high plains, but farther down in the valley, British colonisation altered the course of Anfilloo coffee farming. The arrival of the British caused the demand for coffee to increase, and from that moment on coffee growing began to disperse throughout the region. People began migrating along the transport routes. The Waabaa people followed these migrating men in order to grow coffee. They moved around, bringing their seeds and know-how with them. Thus, at first they stayed fairly close to Waabaa, settling in places such as Yeti and Shebel. The altitude here is comparable, as are the soils and climate. The third stage consisted of a structuring of the sector following the Italian occupation in the 1940s.

From 1940 on: the dispersion across the entire woreda (district)

Following the Italian occupation, King Haylé Selassié of Ethiopia structured the sector in order to finance the construction of a nation state and to strengthen the monarchy. Within the context of tight regulation from the Coffee Board, demand increased. Back in Anfilloo, farmers who were mostly of Waabaa origin began migrating to the north toward the woreda (district) of Gidaamii and to the west toward the woreda of Dambi Dollo.

This relatively simple pattern repeated itself more or less all over the area:

Indigenous men moved on to start new villages along the roads and paths, in tandem with the development of the coffee industry and the increase in population. They migrated along with their know-how and their seeds, and set up coffee farms close to people's homes. Some examples of this development include Yarer, Kolli, Ennéché and Dulli. As the years went by, plantations infiltrated the woodlands and moved to higher altitudes, to areas farther away and more difficult to reach.

In tandem with this expansion, Italian and Greek collectors began to appear. These collectors brought with them certain technical knowledge, and were able to install cleaning stations and manage the necessary machinery with their expertise. There was, for example, a certain man named Angelo in Garjeda who built a water system in the village in order to provide his cleaning station with running water. The remnants of this system are still visible along village paths to this day. Old machines that were nationalised during the revolution are still there: indications of a revolutionary past.

From the revolution (1974) until now: what does the future have in store for Coffee Forests of Anfilloo?

Between the time of the revolution with its derg regime (1974-1991) and now, there have been some new developments in Anfilloo coffee growing. Farmers continued to climb higher in order to reach the tops of the hillsides and altitudes of 2,400m. It is truly understandable, especially within the context of global warming, that people would seek out higher altitudes when the temperature decreases by 0.6°C ever 100m... At the same time, farmers have invaded the forests more and more in order to be able to grow coffee. They have set themselves up in areas of forest reserves and do not have that famous "carta" that would give them to right to use the land, which is now state-owned.

Within this context, agro-forestry technology is a major factor in the market since it can help stabilise traditional farm-holders while, at the same time, promoting environmental protection. When it comes to coffee, demographic pressure should go hand-in-hand with a respect for rain forests of higher altitudes. An appreciation for developing things like honey or spices on the international market might also help preserve these regional forests.

Quality is another major work in progress in Anfilloo. It is very important for farmers to be able to bring quality coffee to the market. Nowadays, most washed products are grade 2 and natural products are grade 4 at conventional levels. Environmental and anthropological data seems to indicate that it is entirely possible for quality to be improved. It will be challenging to do so while preserving the region’s characteristics.

This year and thanks to our Quality project in Anfilloo, we will be able to bring our first natural Q1 from Anfilloo. Those coffees will be available in one month time and we look forward to present them!