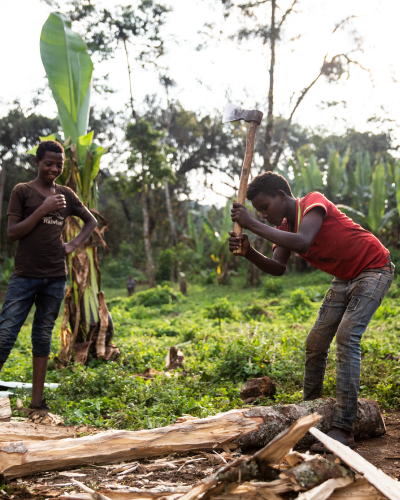 Coffee growing: The challenge in the face of adversity

Marjorie, our coffee agronomist, is in charge at Belco of the quality improvement at the Origin. She wrote a series of articles around the following thematic:  “producing responsibly”. Here is the second episode on a major issue for coffee production: the shade management. If you have not read the previous article, click here.

Coffee growing: The challenge in the face of adversity

I can say with certainty that every time we work on the field with our coffee partners, we confirm how versatile coffee is throughout all its stages; after visiting one of our coffee suppliers in Cameroon last year, I remember to have asked Jacques – from our agency in Ethiopia -  for some bibliographical sources that could help me understand better some specific issues found and after a not so brief talk, we came to the conclusion:

“Nature gives you everything you need”.

I also remember him kindly preparing a list of trees that could be planted and used against some identified problems on such farm. I completely agree with Jacques.

Ethiopia is always a reference.

Ethiopia is the origin, where traditionally coffee bushes have been grown under the shade of trees and where we can get stunning beans; if you have had the chance to visit this country, I am sure you heard –more than once or twice- different versions that describe how first coffee beans were discovered and if you had the time, you lived the adventure of visiting a forest in the search for the so famous wild coffee. In my case, what I saw in the forests was different from what I was really expecting and the last time, I felt much more motivated to investigate and to understand better the complex reality of our coffee growers in Ethiopia, where several transformations are happening dramatically.

Here, the Gera Forest is an example of an agroforestry system that conserves the primary forest.

Wild coffee has been considered a “farming system” but neither coffee bushes nor the forest are given any management. Such areas are supposed to be protected, however what is often found is deforested land extensions and very old and tall coffee “trees” trying to survive.  A study from the University of Jimma affirms that Wild Coffee in rainforest represents a scarce 5% of the coffee land, while Semi-forest and Garden coffee are two systems more often used and where deforestation tends to be normal.

It is not just about judging.

Research and several studies have been carried out in favor of the conservation of forests by prestigious institutions in Ethiopia, most of them demonstrating how indigenous shade trees such as Acacia, Albizia, Millettia, Gravilea and Cordia could help coffee bushes adapt better, produce higher quality beans and increase yields. Other studies consider adaptation and mitigation practices – such as replanting such shade trees- as strategies to ensure sustainable coffee production and also to maintain a sustainable ecosystem. One of the most recent articles I read suggests that coffee-growing areas in Ethiopia could expand despite climate change, if farmers move their farms to higher altitudes and adopt other mitigation strategies, such as irrigating and mulching. In fact, mulching is often done by many growers, however, let’s put ourselves in the shoes of small farm holders: Are they aware of the negative effects of deforestation? Are they familiar with Forest Management and Coffee Management? Do they know the role of indigenous shade trees in coffee and environment? Are they technically and economically supported? Is coffee growing still as profitable as it was some years ago? How realistic would be to move uphill their farms? What about the current ecosystem in such higher lands? The way it is going, we should not get surprised when prices for organic coffee go drastically up and coffee farming in Ethiopia becomes dependent on conventional practices such as inorganic fertilizing and full-sun exposure growing systems.

We are making efforts to identify several indigenous trees species to share with our growers its role in coffee production.

Meanwhile, in other regions…

Coffee regions in Latin America and Asia are also facing the negative effects of global warming; the outbreak and dissemination of coffee leaf rust and coffee berry borer, as well as the reduction in coffee yields and quality are few examples. As in Ethiopia, in Central America coffee growing represents the only source of income used to buy food and supplies for the cultivation of basic grains. In other words, food security is under a high risk. Other farmers are switching from coffee to other crops. Coffee producing countries in Africa, such as Cameroon are not the exception, where extremely high temperatures and excessive rainfalls are registered. One of our coffee growers in Kenya is an excellent example of coffee farming systems adaptation: “I am always very careful while pruning… I have two harvest seasons in the year and sometimes it is necessary to ‘sacrifice’ a percentage of my production to get my farms under renewing to guarantee a higher productivity in a short or medium term”; varieties diversification is also giving him hope.

Water availability from natural sources is being critically affected by deforestation; soil erosion is often found in many coffee plantations, which brings other negative consequences. Resistant and more productive coffee varieties are being introduced by growers. Higher volumes production seems to be a better option to increase their incomes. These are good news: some of our coffee partners are developing interesting projects in the search for improving coffee quality of such varieties at farm and processing levels and the results are positive so far! To guarantee the availability of high quality coffees is now a hard challenge for growers. Much of our work done on the field has to do with raising awareness on the environmental impact due to coffee production, which sometimes seems to be an irrelevant issue. They need to be more supported and as usual, I would recommend the development of educational programs as a useful tool to learn how to adapt coffee to this changing conditions, to respect nature and to responsibly take advantage of its resources.