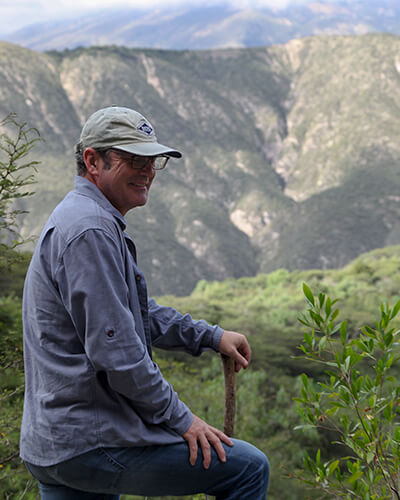 I wonder if I'm not playing with words. And if words were made for this? At the same time, having heard Arnaud (our dear Ecuadorian supplier) tell me: “With my Las Tolas project, I just tried to set up a coffee production plant in the middle of a natural forest. And every day, in some way, the forest tries to kill the coffee. My idea with the Las Terrazas del Pisque was different, as I had tried to grow a forest in the middle of the desert to then be able to grow coffee”, I think I can say that Arnaud is a Builder of empires... especially given that after 10 years working on Las Tolas – in the middle of a real natural forest in which it is not rare to see endemic parrots threatened with extinction living in mountain palm trees ! - he has built a farm producing a quite exceptional quality coffee.

And above all having seen the Terrazas del Pisque at the beginning of production and how it functions perfectly today in the middle of the a desert. But what history is hiding behind this completely improbably success? Las Terrazas del Pisque, a historical cattle-rearing farm located at between 2000 and 2200 metres, was deemed by Arnaud at that time to be the ideal place (according to him) to make one of the most complex cups in the coffee world. He just needed the coffee to grow!

He knew full well that under the farm there was an 8km tunnel which had been made to transport water from the melted glaciers in the region. And as we all know, where there is water, there is life. It is the main reason he decided to buy the farm. Then he started to buy tree seeds from the four corners of the world to build his forest. “At Las Tolas, the trees all know each other, coffee is the only interloper”, he told me. “At Las Terrazas, all trees were foreign to each other and so they couldn't reject the coffee which is just as much an interloper as them in this ecosystem”. In terms of coffee varieties, Arnaud selected the same as at Las Tolas, which he knows so well and loves so much:  Caturra, Yellow Caturra, Bourbon Tekisik, Pacamara, Pacas, Java and a brand new variety, the Las Tolas hybrid, which is a Ecuadorian mutation of his Bourbon.

Today he has been able to transform 15 hectares into coffee growing and hopes to have 17 hectares for his next harvest. His aim is to have production totaling 25 hectares of the 40 hectares on his farm. Not content with just building his empire, Arnaud has also played a solomonesque role for small Ecuadorian producers by educating them and sharing with them his coffee-producing methods. Specialty coffee in a country where it didn't use to exist! His door has always remained open to help other producers and he has always enabled us to have access to them. It is in this way that we began our relationship with new producers, such as 1600, the Las Tolas' neighbouring farm, or Rosa Encarnacion's smallholding at 2300 metres in the region of Imbabura.

This year, Arnaud has had a significant production at Las Tolas: we have his famous Caturra/Pacas blend, but also single varieties such as Bourbon Tekisik, Java and Pacamara. We have also been able to buy a few more bags of Las Terrazas del Pisque, which is consequently starting to be produced. From 1600 we have got some exceptional lots and they have separated their coffees from this harvest by variety: we have some Caturra, Bourbon Tekisik and Pacamara. From Rosa Encarnacion and her La Rafaela farm, we have bought a small lot of Caturra/Colombia, and we hope that this little terroir will win over some new regular customers. We have all these coffees in stock  and you can start asking us for samples ! Angel, for the Belco team PS1: I specify Tekisik for Bourbon as this is a Bourbon that comes directly from El Salvador. Arnaud had selected it when he began the Las Tolas adventure and he has subsequently distributed it to other producers. PS2 : For those who know me, you may have noticed the Boris Vian quotes I have slipped into this text :)
share