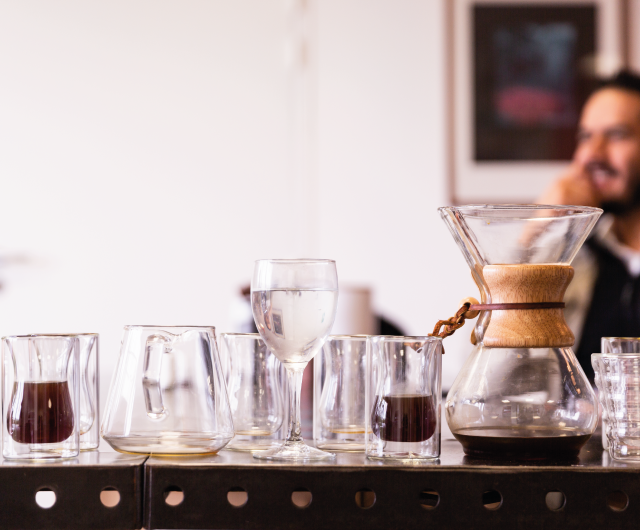 Espresso or Filter - Which hides the most caffeine ?

Belco will be soon publishing a series of articles on decaffeinated coffee, explaining the different green coffee extraction processes. But first of all, Jeremie intented to answer one of the fundamental questions : what is caffeine and above all, what happens to it in the cup during extraction?

Caffeine is an alkaloid, which means it’s an organic substance produced by plants that has at least one nitrogen atom in its molecule (N Compound). Caffeine was first discovered in 1819 by the German chemist Friedlieb Ferdinand Runge, and during the 19th century was found to exist in many exotic plants and substances, including chocolate, tea (called theine), guarana and of course coffee.

It is the same molecule that is present in all these products..

What caffeine is used for?

Coffee bushes produce caffeine and trigonelline, which is another alkaloid found in plants, to protect themselves from insects, like a sort of self-defence mechanism (it is interesting to note that at high altitudes, where insects and pests are rarer, coffee bushes actually contain less caffeine). Caffeine is therefore a natural antiseptic, created by coffee plants to protect themselves from their surrounding environment.

In terms of flavour, we know that caffeine has a bitter taste, but it is not the only thing that makes a cup of coffee taste bitter. Caffeine accounts for about 10% of a cup’s bitterness, with the remaining 90% being attributed to the roasting process, due notably to the decomposition of chlorogenic acids and sugar browning, not to mention preparation, which also affects bitterness.

Filter vs. Espresso: how much caffeine in each extraction?

While we’re on the subject of preparation, what about the famous belief that filter coffee contains more caffeine than an espresso?

However, as is often the case in matters concerning our cherished coffee, this statement is not entirely accurate. We need to compare like-for-like, in other words think in terms of volume. Particularly since the volumes associated with the various extraction methods are changing as a result of consumer preference, and it is no longer uncommon to see people drinking large volumes of coffee, including espresso coffee....

So to be more precise, we could summarise the facts as follows: if you’re drinking a traditional cup of coffee, for example an espresso served in a small cup, the caffeine concentration will be lower. But in terms of volume, an espresso contains much more caffeine than a filter coffee, because a 30 ml cup contains a higher concentration of soluble substances (TDS, or total dissolved solids), and it is this that makes all the difference.

Quantity of caffeine, difference between volume and concentration
In conclusion, it is because they consume small volumes that many Italians are able to drink between 5 and 10 espressos a day, on average, without being too affected by caffeine. If you tried to drink between 5 and 10 filter coffees a day measuring 240 ml each, you would very quickly feel the effects of too much caffeine in your body.
And if you drank between 300 and 500 ml of espresso coffee a day, you would experience the same problem.
Anyone want to try?!

Jérémie, for the Belco team

Decaffeinated coffees are attracting interest from a new public, more mindful of cup quality, which is something that many decaffeination professionals have clearly understood. At Belco, we place a high priority on integrity, and are firmly commited to supplying quality green coffees. This is why we chose to study the different decaffeination technologies more closely, in order to choose the one that best meets our quality standards. As a result of this research, we are today able to answer many questions and concerns and put paid to some preconceived ideas about “decaf” coffee.

We currently work with four partners, who decaffeinate our coffees using three different processes. César, our quality manager, has travelled the world to find out exactly what each decaffeination process involves. From Canada to Germany, via Colombia and Mexico, click on the links below to read our reports :
share