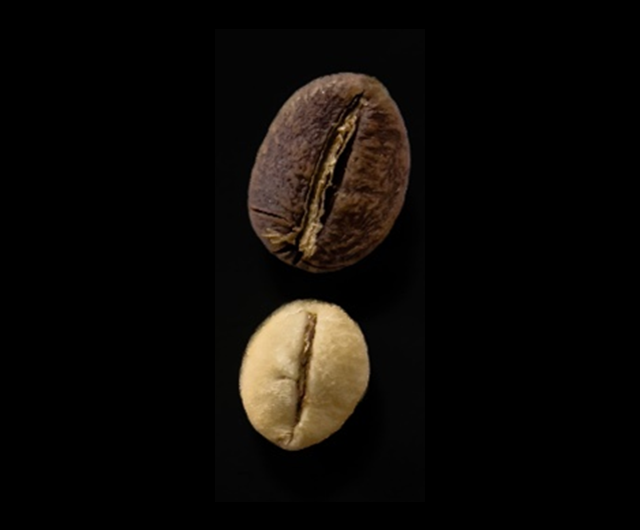 Don’t worry, you’ll find nothing frightening in this article, and nothing bad will happen when you read it! You may even find it interesting...

Canephora has become a hot topic in the world of coffee.

It was once common in France, to then be gradually abandoned in favour of arabica. However, lots of people working in the coffee industry are now showing increasing interest in Coffea canephora.

According to the latest USDA (United States Department of Agriculture) estimates, Coffea canephora production accounted for 47% of world coffee production in 2021-2022 compared to 40% in 2018-2019. We have seen an upward trend over the past few years, with a real dynamic in Brazil. 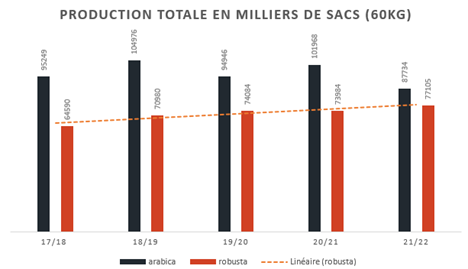 The challenges surrounding arabica production, rising production costs and recent research into improving the quality of Coffea canephora may play a part in explaining this renewed interest.

We should begin by clarifying some terminology. The words robusta and Coffea canephora are often used interchangeably, reflecting the confusion surrounding this species.

Taxonomy – the system used to classify living organisms – organises things into groups, from most general to most specific. This means that coffee shrubs are organised by family, genus, species and then variety.

More specifically, coffee shrubs are tropical plants of the large Rubiaceae family, of the genus Coffea, which includes a multitude of species. The best known is Coffea arabica, but we could also mention Coffea eugenioides, Coffea liberica and Coffea canephora (this is a non-exhaustive list, there are some 125 species in total, including also Coffea salvatrix, Coffea brevipes, Coffea racemosa, etc.).

In other words, Coffea canephora is a separate species from Coffea arabica and has its own varieties, the best known being robusta. Another example is conilon, in Brazil. Identifying and distinguishing between these varieties can prove complicated, as we’ll see further on in this article.

Canephora was discovered quite late, in the 19th century, on the shores of the Lomami River in the Democratic Republic of Congo (Herrera and Lambot, 2017), when it was a Belgian colony. At the beginning of the 20th century, the country began moving its first varieties of robusta to the island of Java, through its Belgian botanical nursery. Cultivation then began in India, Uganda and the Ivory Coast. In 1912, the first varieties of Coffea canephora entered the American continent, with some first crops in Brazil.

The Coffea canephora species is now cultivated in all these countries, led by Vietnam, Brazil and Indonesia. As you can see, production in Brazil has risen sharply over the past five years, where the Espirito Santo region produces between 70 and 80% of the country’s total conilon output. Over the past 50 years, conilon plants have gradually replaced arabica. According to Rafael Marques, partner to Belco & FAF Coffee and founder of the Lado a Lado project, conilon has been present for more than a century, but the research dedicated to improving its aromatic complexity, productivity and disease resistance has developed in less than 30 years.

Two hundred clones have been tested and new, higher quality varieties have been developed, for example diamante, jequitiba, centenario and victoria, produced in the Espirito Santo terroir at altitudes considered quite high for a canephora coffee. Rafael has informed us that demand for high-quality conilon is increasing, and that it could even be promoted as a pure origin coffee, like some arabicas. Belco will be receiving its first lot of Espirito Santo conilon in December 2022. 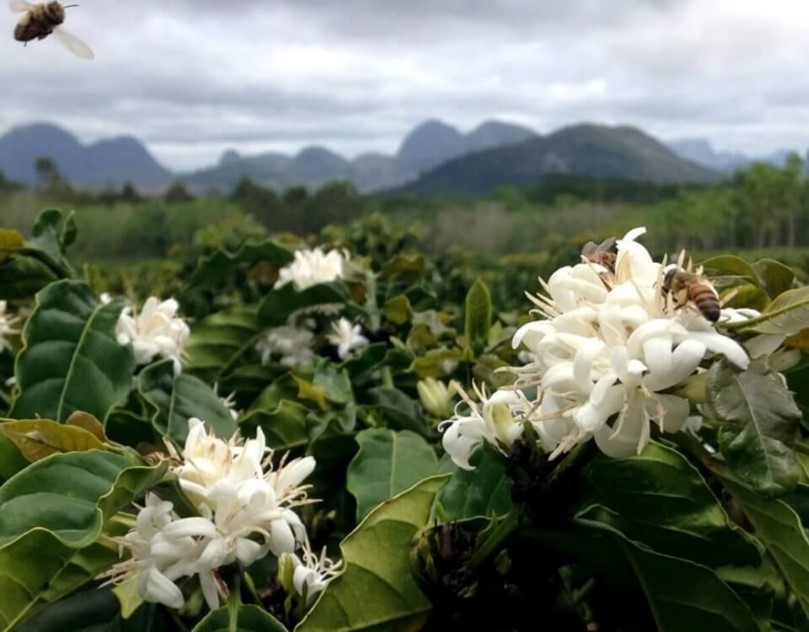 Diagram of sexual reproduction in plants

New botanical varieties have also developed as a result of spreading to different continents. The best known is robusta, but there is also kouilou (which produces smaller cherries and beans than robusta). Conilon is a variety that originates from Brazil. Its name is thought to result from a mistranslation of kouilou (where the ‘u’ became ‘n’). Two more worth mentioning are the gimé and niaouli varieties from West Africa. It will be easy to identify a Coffea canephora visually. The grain is smaller than the Coffea arabica and of a more spherical shape. 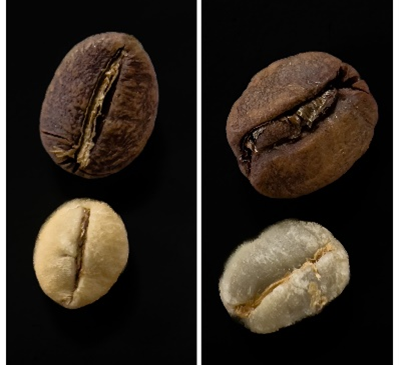 To better understand canephora’s specific aromatic profile, it is a good idea to look at its chemical composition and compare it with arabica. Lindsay et al. (2012) have provided a table that compares the two species. 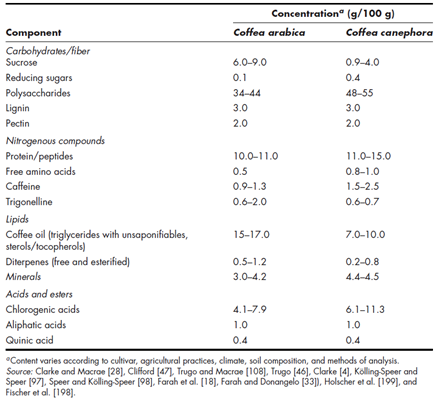 The main differences between the two species concern their concentrations in sucrose, caffeine, trigonelline and chlorogenic acid.

High concentrations of chlorogenic acid and caffeine have a negative impact on cup quality, while low levels of sucrose and trigonelline reduce coffee complexity. During roasting, chlorogenic acid breaks down into lactone and quinic acid, which leave a bitter taste. The caffeine does not break down on roasting, leaving high levels that contribute also to coffee bitterness. Sucrose is essential for the Maillard reaction, since it decomposes into glucose and fructose during roasting. And trigonelline breaks down into volatile compounds. Small amounts of these two chemical compounds will impair aromatic complexity.

Poisson et al. (2012) add that the high amounts of free amino acids in canephora also have a negative effect on the cup, because they leave earthy or even animal notes.

This species contains more polysaccharides, which are the main components of cellulose. These polysaccharides protect cherries against external contamination and degradation, meaning that Coffea canephora ages better than arabica. They also give the coffee a thicker body.

As Lingle and Menon (2017) point out, the Specialty Coffee Association of America (SCAA) created the Specialty Coffee Institute (SCI) in 1995 to promote a more scientific approach to specialty coffee evaluation. In 1998, when the price of coffee fell sharply below production costs, the SCI became the CQI (Coffee Quality Institute). Its missions evolved to focus more on continuous improvement of coffee quality and of the living conditions of producers. This led to the creation of a formal SCAA cupping protocol. Fifteen years later, in 2010, the CQI released its canephora cupping protocol.

Initially, canephora was grown mainly for its hardy and productive properties. In recent years, the scientific community has been working on varieties with more complex flavour profiles. Some farmers are now investing as much effort in the cultivation of this species as they do in arabica. Associations and groups devoted to improving the quality of Coffea canephora now also exist, in addition to those already set up for arabica, pointing to an as-yet untapped quality potential.

Studies of factors affecting the production and aromatic profile of Coffea canephora are now needed to improve quality and sustainability in this sector (Linge and Menon, 2017).

Like arabica, altitude has a positive effect on cup quality. Cherries growing above 1,000 metres of altitude mature more slowly and are of a higher density, ensuring a more complex profile. Shade growth also gives a better aromatic quality (based on studies in India, a country heavily involved in canephora research). Historically, canephora was processed dry, or using a “natural” method. “Washed” and wet processes are much more complex than for arabica since the mucilage of Coffea canephora is both thicker and stickier, making it more difficult to wash. There is also a risk of damaging cherries in the course of this process and causing “cut” defects (official SCA defect, involving physical weakening of the cherry). The fermentation stage can prove problematic too, because of the canephora’s anatomy (thick mucilage) and the higher temperatures at these altitudes. Fermentation can take more than 72 hours, compared to 24 to 48 hours for arabica. And great care and precision are necessary to avoid a “sour” defect (official SCA defect, involving a yellowish cherry with a vinegary odour).

Farmers producing canephora have tended not to explore this type of process. However, it’s this wet method, combined with careful and selective picking, controlled fermentation and successful drying, that has been shown to improve cup quality, delivering a brighter acidity, lower bitterness and better overall cup clarity. The “honey” and “pulped natural” processes are also opening up new avenues for quality improvement.

Overcoming the significant challenge of improving quality will call for heavy investments in programmes that raise awareness and support producers. Cupping must be well-structured and conducted by calibrated professional tasters, sharing the same understanding of both the standard profiles and the new aromatic profiles of Coffea canephora.

In 2010, the Q Robusta (or R Grader) programme was born of a partnership between the CQI and the Uganda Coffee Development Authority (UCDA),

Its aim is to create a formal common language for describing Coffea canephora quality with a specific cupping form. R Grader tasters focus on 10 categories when evaluating each coffee. Some appear also in the arabica cupping form, for example “Fragrance/Aroma”, “Flavour”, “Aftertaste”, “Balance”, “Uniform cups”, “Clean cups” and “Overall”. Others are specific to Coffea canephora, such as “Bitter/sweet aspect ratio”, “Mouthfeel” and “Salt/acid aspect ratio”.

The “Bitter/sweet aspect ratio” evaluates perception of bitterness versus sweetness. A Fine Robusta will have a higher perceived sweetness than a conventional robusta.

“Mouthfeel” characterises a coffee’s body and tactile sensations; a silky texture is considered a quality. Weight may also be given importance in the final score.

Finally, the “Salt/acid aspect ratio” analyses the balance of perceived salty and tangy flavours. Canephora can contain high levels of potassium (salty taste) and low concentrations of citric acidity. The perceived salinity of a Fine Robusta will be lower (less potassium).

We then compared them, to better situate these new coffees and our existing range in the current market and to explore new options for Belco. To address the issues of climate change, increased freight costs and unexplored potential quality, Belco wants to deepen its knowledge of Coffea canephora and Fine Robusta.

For our cupping, we used the following CQI classes: Standard <76; Premium 76-80; and Fine Robusta 80+. To make simultaneous cupping of all 35 coffees simpler, we allocated each coffee to one of these three classes, awarding 1 point for the Standard range, 3 for the Premium range and 5 for the Fine range. We used the averages to arrive at an overall score.

In light of the results, we chose to integrate these CQI classes at Belco, import some new canephoras and include a new range with 83+ rated coffees. We now cup them separately from arabica to avoid comparison. 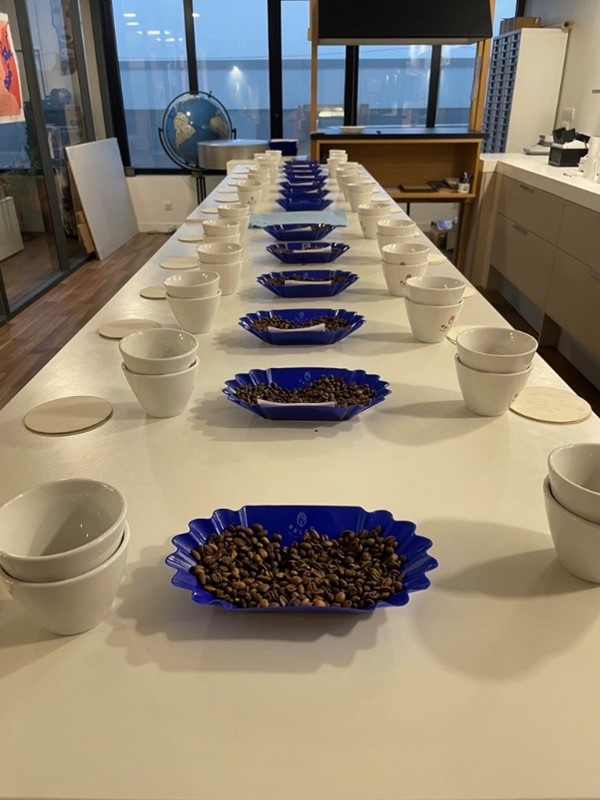 Coffea canephora still suffers from a poor image in terms of quality and production, but positive changes are underway within the industry. Climate change and rising production costs are accelerating these developments. Given the ecological impacts of production, it is important to spotlight how well Coffea canephora adapts to high temperatures, which means farmers can grow the species without using lots of chemical inputs.

The canephora sector is also increasing in quality. We are seeing new cup profiles, more research on fermentation and yeast, and even increased participation in international barista championships.

For a long time, canephora suffered from its comparison with arabica. We must now gradually detach ourselves from this comparison, made out of ignorance. It is time to stop demonising Coffea canephora and robusta, which are both still in early development! We might also point out that, genetically, they figure among the resistant “arabica” varieties (Timor Hybrid, Catimor, Castillo, Ruiru 11, Marsellesa ) now widely available.

Canephora can make an important difference to the future of the coffee industry, by increasing the surface area of cultivable land and its quality, reducing the overall ecological impact, and making a unique contribution to our espressos.

Poisson L., Blank I., Dunkel A., et Hofmann T. (2012), « The Chemistry of Roasting-Decoding Flavor Formation » dans The Craft and Science of Coffee, Chapitre 12